We, at MDA CAPITAL INVEST, a.s. (MDACI), will always support Eco-Economy and the development of Green Environment (GE) to reduce Global Warming (GW). 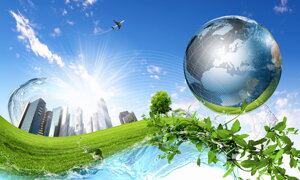 As successful as the Green Revolution was, the wholesale transfer of technology to the developing world had its critics. Some objected to the use of chemical fertilizer, which augmented or replaced animal manure or mineral fertilizer. Others objected to the use of pesticides, some of which are believed to be persistent in the environment. The use of irrigation was also criticized, as it often required drilling wells and tapping underground water sources, as was the encouragement of farming in areas formerly considered marginal, such as flood-prone regions in Bangladesh. The very fact that the new crop varieties were developed with foreign support caused some critics to label the entire program imperialistic. Critics also argued that the Green Revolution primarily benefited large farm operations that could more easily obtain fertilizer, pesticides, and modern equipment, and that it helped displace poorer farmers from the land, driving them into urban slums. Critics also pointed out that the heavy use of fertilizer and irrigation causes long-term degradation of the soil.

Proponents of the Green Revolution argued that it contributed to environmental preservation because it improved the productivity of land already in agricultural production and thus saved millions of acres that would otherwise have been put into agricultural use. It is estimated that if cropland productivity had not tripled in the second half of the twentieth century, it would have been necessary to clear half of the world's remaining forest-land for conversion to agriculture (Brown, Eco-Economy ).

By signing up I agree to the processing of personal data.

This site uses cookies. By proceeding, you agree to our Privacy Policy, including the use of cookies and other tracking technologies, which create cross-page statistical evaluations designed to meet your needs and provide you better experience. More info